To share your memory on the wall of Betty Messenger, sign in using one of the following options:

Betty graduated from Scott City High School in 1951. She worked alongside her husband ranching, farming, and in various businesses in the Dighton area before moving to Garden City in 1979 where she pursued a degree in nursing. She worked at St Catherine Hospital as a Registered Nurse until her retirement in 1998. She was a member of the First United Methodist Church, volunteered at Garden Valley Retirement Village and was a member of the Red Hat Society. She enjoyed regularly playing cards with friends, participating in water aerobics at the YMCA, reading, cultivating her garden and keeping in touch with other nurses, classmates and friends.

Graveside Service will be at 2:00 PM Saturday, September 19 at Scott County Cemetery in Scott City. Memorials are suggested to First United Methodist Church or St Catherine Hospice in care of Garnand Funeral Home. Condolences may be posted at www.garnandfuneralhomes.com

Receive notifications about information and event scheduling for Betty

There are no events scheduled. You can still show your support by sending flowers directly to the family, or planting a memorial tree in memory of Betty Elaine Messenger.
Plant a Tree

We encourage you to share your most beloved memories of Betty here, so that the family and other loved ones can always see it. You can upload cherished photographs, or share your favorite stories, and can even comment on those shared by others.

Posted Sep 10, 2020 at 08:30pm
Betty’s kids: loved your mom. She was so dear to me. Loved our classes together in nursing school and later working the BHU with her. She was brilliant. Blessings to your families.
Comment Share
Share via:
AW

Posted Sep 09, 2020 at 05:29pm
Shane, Tanya, Tara and families, the passing of Betty saddens us greatly. As neighbors on the farm, friends of our family to a colleague at St Catherine Hospital Betty was always a wonderful person. We, Charles, Anita and myself have very special memories of her, your Dad and you. May God comfort you and give you peace during this time of grief.
Avis, Anita and Charles Wallace 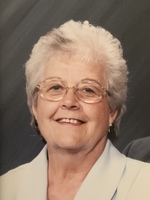