To share your memory on the wall of Edith Carr, sign in using one of the following options:

Edith has been a lifetime resident of Garden City where she attended Garden City schools. On December 13, 1947, she married Norman George Carr, Sr. in Garden City. A homemaker, Edith was a member of Bible Christian Church in Garden City. She enjoyed crocheting, playing cards, puzzles, music, Bible studies, and she loved to spend time and take care of her grandchildren.

Funeral services will be held at 11:00 a.m. on Thursday, September 24, 2020 at Bible Christian Church in Garden City with Pastor Bob Bates officiating. Burial will follow at Valley View Cemetery in Garden City. Friends may call from 3:00 p.m. to 8:00 p.m. on Tuesday and from 9:00 a.m. to 8:00 p.m. on Wednesday all at Garnand Funeral Home in Garden City. The family suggests memorials given to ABC Pregnancy or to Bible Christian Church, both in care of the funeral home.
Read Less

To plant a memorial tree in honor of Edith Carr, please visit our Heartfelt Sympathies Store.

Receive notifications about information and event scheduling for Edith

We encourage you to share your most beloved memories of Edith here, so that the family and other loved ones can always see it. You can upload cherished photographs, or share your favorite stories, and can even comment on those shared by others.

Posted Sep 22, 2020 at 10:18am
My sympathies and prayers for all of you. Edith was such a sweetheart and I always enjoyed getting to chat with her. She had the most beautiful smile and twinkle in her eyes. What a glorious time in Heaven for her with Jesus and her loved ones.
Comment Share
Share via: 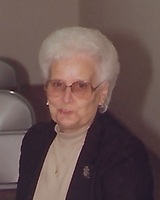