To share your memory on the wall of Everett Baier, sign in using one of the following options:

Born in Garden City, Kansas, Whitey has been a lifetime resident of Holcomb and Deerfield. He attended school in both Holcomb and Deerfield, and graduated from Deerfield High School in 1982. Whitey has worked most of his life as a farm hand. On January 18, 1997, he married Melissa Pelnar in Garden City. He was a member of the Deerfield Brotherhood and served as a volunteer firemen in Deerfield. He enjoyed NASCAR, NHRA, fishing, hunting, camping, and mudding.

A memorial service will be held at 10:00 a.m. on Saturday, September 12, 2020 at Garnand Funeral Home in Garden City with Pastor Larry Alexander officiating. A private family interment will take place at a later date. There will be no calling hours. The family suggests memorials given to the Deerfield Brotherhood in care of Garnand Funeral Home of Garden City.
Read Less

Receive notifications about information and event scheduling for Everett

We encourage you to share your most beloved memories of Everett here, so that the family and other loved ones can always see it. You can upload cherished photographs, or share your favorite stories, and can even comment on those shared by others.

Posted Sep 10, 2020 at 08:43am
I am so sorry to hear of your loss Terry. My thoughts and prayers are with you and your family.
Comment Share
Share via:
BE

Posted Sep 09, 2020 at 08:52pm
I'm so sorry. Davie was quiet but always had a peaceful smile and way about him. I was blessed to be his cousin.
Comment Share
Share via:
MB

Posted Sep 09, 2020 at 04:02pm
When the kids were little Dave would always get to rough-housing with them. Anytime they would get too carried away or start to get the best of him, he would tell them, "ok, that's enough, you almost poked my eye out!" 😂
Comment Share
Share via:
CW 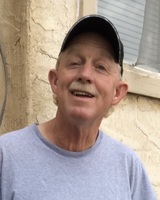