To share your memory on the wall of Helen Hoyt-Blackman, sign in using one of the following options:

Helen entered the Nursing Program at St Catherine Hospital in 1947. She was a Registered Nurse and had worked at St Catherine Hospital, as a Physician Nurse, High Plains Retirement Village and Garden Valley Retirement Village in her nursing career. She was a member of the First Christian Church, American Legion Auxiliary and the 377 EAA Flying Club. She enjoyed crocheting and cooking.

Graveside service will be at 1:00 PM Wednesday at Valley View Cemetery in Garden City with Pastor Jim Shellenberger officiating. Memorials are suggested St Catherine Hospice in care of Garnand Funeral Home. Condolences may be posted at www.garnandfuneralhomes.com

Receive notifications about information and event scheduling for Helen

There are no events scheduled. You can still show your support by sending flowers directly to the family, or planting a memorial tree in memory of Helen L. Hoyt-Blackman.
Plant a Tree

We encourage you to share your most beloved memories of Helen here, so that the family and other loved ones can always see it. You can upload cherished photographs, or share your favorite stories, and can even comment on those shared by others.

Plant a Tree in Memory of Helen
Plant a tree 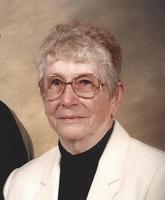