To share your memory on the wall of Pete Rowland, sign in using one of the following options:

Pete attended school in Texas and Arizona as a young child before moving with his family to Garden City. Pete was self-employed as the owner and operator of Rowland Construction. He was a member of St. Mary Catholic Church in Garden City, and enjoyed golfing, fishing, boating, hunting, and softball. He especially enjoyed spending time with his family.

Receive notifications about information and event scheduling for Pete

We encourage you to share your most beloved memories of Pete here, so that the family and other loved ones can always see it. You can upload cherished photographs, or share your favorite stories, and can even comment on those shared by others.

Plant a Tree in Memory of Pete
Plant a tree
0 trees have been planted in memory of Pete G. Rowland Jr.
JM

Posted Jul 08, 2020 at 08:59pm
So sorry for your loss, our loss, and everybody's loss. He was such a great guy, and a great friend. Pete knew everybody and everybody knew him. We are going to miss you. Virginia and the rest of the family, our prayers for you.

Posted Jul 05, 2020 at 09:51pm
Condolences to the family. I worked with Pete many years ago at farmland foods He was a nice person

Sorry for your loss, my thoughts and prayers are with you all. Becky Orozco Wichita KS 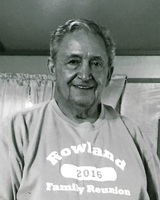