To share your memory on the wall of Randall Carr, sign in using one of the following options:

Funeral service will be held at 10:00 a.m. on Saturday, August 29, 2020 at Bible Christian Church in Garden City with Pastor Brian Wilson officiating. Burial will follow at the Lakin Cemetery in Lakin, Kansas. Friends may call from 4:00 p.m. to 8:00 p.m. on Thursday and from 9:00 a.m. to 8:00 p.m. on Friday all at Garnand Funeral Home in Garden City. The family suggests memorials given to the Randy Carr Memorial Fund in care of the funeral home.
Read Less

Receive notifications about information and event scheduling for Randall

We encourage you to share your most beloved memories of Randall here, so that the family and other loved ones can always see it. You can upload cherished photographs, or share your favorite stories, and can even comment on those shared by others.

Posted Aug 29, 2020 at 01:40pm
I got to know Randy when he was a big part of a Bible study that Tom led years ago.
I always liked it when we would get to church servive and he would be there in front of the sanctuary so I could start my week off with a "Randy hug"!
Comment Share
Share via:
CF

Posted Aug 27, 2020 at 10:13am
I am sad for those family members and many friends Randy has left behind, but rejoice with him as there is no doubt Randy is rejoicing with our Savior and Heavenly Father!! Rest, my friend. Your journey has ended here on earth, but your next one has just begun.
Comment Share
Share via:
CH

Posted Aug 27, 2020 at 12:54am
Edith and the rest of the family. I just now heard of Randy's death. I am so sad. And yet I rejoice that he is with his Lord at the same time. He was a simple and yet very complex man. A man who was very private and yet seemed to be friends with everyone. I loved him and am proud to have called him not just a parishioner but a friend. I already miss him.
Comment Share
Share via:
BM

Posted Aug 26, 2020 at 04:31pm
I am so very sorry to hear about Randy. But knowing how strong his faith was in God, I know he's clapping along to the music as loud as he can up in Heaven. Randy was such an inspiration to so many people, myself included, by how he lived his faith. That man knew and loved our Lord. My thoughts and my prayers are with you all.
Comment Share
Share via: 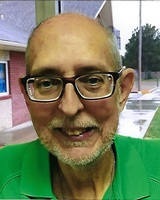