To share your memory on the wall of Robert Finley, sign in using one of the following options:

In his younger hears, bob was an avid boxer. His ultimate love was racing. Bob raced Micro Midgets, Modifieds, Stock Cars, and ended his racing career in Sprint Cars. He worked on Main Street in Garden City for nearly 60 years, with owning Finley’s Men’s Wear from 1982 and retiring in 2014. He also served with the Army National Guard and Reserves.

Bob is preceded in death by his parents; a brother Jerry Finley; a sister Pat Noel-Johnson; and a brother-in-law Henry Gillan.

Funeral services will be held at 10:00 a.m. on Saturday, June 27, 2020 at Garnand Funeral Home in Garden City with Rev. Joel Plisek officiating. A private family interment will take place at a later date. There will be no calling times. The family suggests memorials given to the Robert A. Finley Memorial Fund in care of Garnand Funeral Home of Garden City.
Read Less

To plant a memorial tree in honor of Robert A. "Bob" Finley, please visit our Heartfelt Sympathies Store.

Receive notifications about information and event scheduling for Robert

We encourage you to share your most beloved memories of Robert here, so that the family and other loved ones can always see it. You can upload cherished photographs, or share your favorite stories, and can even comment on those shared by others.

Plant a Tree in Memory of Robert
Plant a tree 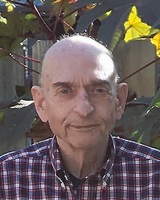