To share your memory on the wall of David Koelzer, sign in using one of the following options:

David grew up in Texas and served in the National Guard after graduating high school. He lived in Satanta for many years where he was a truck driver and Assistant Pastor at the First Church in Satanta. In 2008 he moved to Garden City and was a truck driver for PMS Liquid Protein and then with his Step-Son at M and M Transport of Lakin. He enjoyed hunting, fishing and playing his guitar and singing at church.

He is survived by his Wife- Linda Koelzer of Garden City, Son- Ben Koelzer of Amarillo, Texas, Daughter- Mandy Sunderland of Satanta, Step-Daughters- Melissa Munoz and Tammy Munoz both of Garden City, Step-Son- Matthew Daniels of Lakin, Brother- James Koelzer of Hereford, Texas, Sister- Judy Koelzer of Friona, Texas, 11 Grandchildren and 8 Great-Grandchildren. He was preceded in death by his Parents, 3 Brothers and 2 Sisters.

To plant a memorial tree in honor of David B. "Coaltrain" Koelzer, please visit our Heartfelt Sympathies Store.

Receive notifications about information and event scheduling for David

There are no events scheduled. You can still show your support by sending flowers directly to the family, or planting a memorial tree in memory of David B. "Coaltrain" Koelzer.
Plant a Tree

We encourage you to share your most beloved memories of David here, so that the family and other loved ones can always see it. You can upload cherished photographs, or share your favorite stories, and can even comment on those shared by others.

Plant a Tree in Memory of David
Plant a tree 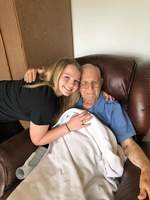