To share your memory on the wall of Richard Stroup, sign in using one of the following options:

Richard married Ruth Marie Waterman on December 5, 1965. The two of them relocated their young family in 1980 to Garden City for Richard’s job. Richard devoted 40 years to what was then Freezer Services, now known as Americold Logistics.

Richard is described as a quiet man, when he spoke he made it count as it was something you truly needed to hear. He loved his family deeply and enjoyed watching westerns, especially anything with John Wayne. He was a talented carpenter and enjoyed collecting things like pocket watches, coins, and guns. He loved his animals, all of them, dogs, cats, even the chickens!

Survivors include his wife- Ruth, Children- Paul, Todd, and Beth, Sisters- Carolyn, Betty, Wanda, and Linda, Grandchildren- Kyla, Brooke, and Hunter, Step-Grandchildren- Derrick and Amy, and Great-Granddaughter- Katalina. Richard was preceded in death by his parents and one brother.

To plant a memorial tree in honor of Richard Stroup, please visit our Heartfelt Sympathies Store.

Receive notifications about information and event scheduling for Richard

There are no events scheduled. You can still show your support by sending flowers directly to the family, or planting a memorial tree in memory of Richard Stroup.
Plant a Tree

We encourage you to share your most beloved memories of Richard here, so that the family and other loved ones can always see it. You can upload cherished photographs, or share your favorite stories, and can even comment on those shared by others.

Plant a Tree in Memory of Richard
Plant a tree 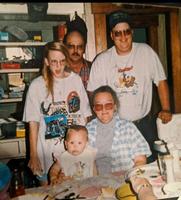